During the Cold War the FAL was adopted by many countries of the North Atlantic Treaty Organization (NATO), with the notable exception of the United States. It is one of the most widely used rifles in history, having been used by more than 90 countries.[4] Because of its prevalence and widespread usage among the militaries of many NATO and first world countries during the Cold War, it received the title “The right arm of the Free World”.

It is chambered for the 7.62×51mm NATO cartridge

FAL’s were equiped by South Africa and Rhodesia from the 1960’s and used during the South African Border War and the Rhodesian Bush War.

Called a battle rifle rather than a true assault rifle by some in the small arms field, the FN FAL used the high-powered ammunition of World War Two bolt-action weapons rather than the less-powerful “intermediate” rounds preferred for assault rifles.
The FAL first appeared in 1950 and quickly set a world standard. South Africa adopted it as a standard service rifle in the early 1960s. By the 1980s it was in use with over 70 countries. The FAL and R1 family has largely been withdrawn from SANDF service, barring a few accuratised rifles issued for use as snipers’ weapons.

A copy of the first weapon made in SA – and received on behalf of the state by then-Prime Minister Hendrik Verwoerd on September 23, 1964 – is on display in the SA Museum of Military History in Saxonwold, Johannesburg. 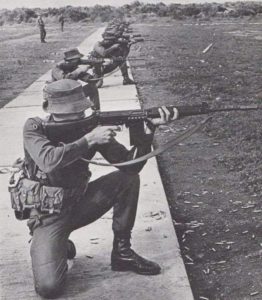