The M79 grenade launcher is a single-shot, shoulder-fired, break-action grenade launcher that fires a 40×46mm grenade, which uses what the US Army calls the High-Low Propulsion System to keep recoil forces low, and first appeared during the Vietnam War. Because of its distinctive report, it has earned the nicknames of “Thumper”, “Thump-Gun”, “Bloop Tube”, “Big Ed”, “Elephant Gun,” and “Blooper” among American soldiers as well as “Can Cannon” in reference to the grenade size; Australian units referred to it as the “Wombat Gun”. The M79 can fire a wide variety of 40 mm rounds, including explosive, anti-personnel, smoke, buckshot, flechette (pointed steel projectiles with a vaned tail for stable flight), and illumination. While largely replaced by the M203, the M79 has remained in service in many units worldwide in niche roles.

The M79 was a result of the US Army’s Project Niblick, an attempt to increase firepower for the infantryman by having an explosive projectile more accurate with further range than rifle grenades, but more portable than a mortar. Project Niblick created the 40 x 46 mm grenade, but was unable to create a satisfactory launcher for it that could fire more than a single shot. One of the launchers at Springfield Armory was the three-shot “harmonica” T148 (not to be confused with the later, underbarrel XM148), which did see some limited production and fielding in Vietnam, but problems with the three-round magazine prevented widespread acceptance. The other design was a single-shot break-open, shoulder-fired weapon, the S-3. This was refined into the S-5, which resembled an oversized single-barrel shotgun. Unable to solve the problems with the multi-shot T148 launcher, the Army adopted the S-5 as the XM79. With a new sight, the XM79 was officially adopted as the M79 on December 15, 1960.

In 1961, the first M79 grenade launchers were delivered to the US Army. Owing to its ease of use, reliability, and firepower, the M79 became popular among American soldiers, who dubbed it “the platoon leader’s artillery”. Some soldiers would cut down the stock and barrel to make the M79 even more portable.

The M79 saw combat in the Vietnam War beginning in the early days, when M79 Grenadiers assigned to major Army divisions first arrived to see combat in Vietnam in 1965, including the 1st Cavalry Division, the 1st Infantry Division, the 101st Airborne Division, and the 173rd Airborne Brigade. M79s were assigned to the specialist 4 grenadier in both 4-5-man fire teams organic to an Army rifle squad headed by a squad leader. The Marines assigned one grenadier to their three-fire team 14-man rifle squad. 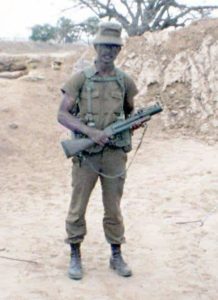 M79 Gunner poses briefly with his 40mm “snotneus” single shot Grenade Launcher prior to going out on patrol.