The MILKOR MGL (Multi-shot Grenade Launcher) is a repeating grenade launcher originating from South Africa. It was the first commercially successful weapon of this type. The MGL may not have been the first weapon of this type (that honor goes to the Hawk Engineering MM-1), but it is beyond disputable that it validated the concept. While MILKOR has produced other weapons, the MGL is the one they’re best known for.

Development of the MGL was surprisingly swift and problem-free, having been designed in 1980 by Andries C. Piek, and the first prototypes being completed in 1981. After 2 years of trials and further developments, it was accepted into service with the South African Defense Force (SADF) in 1983 as the MGL Mk.1. Soon after MILKOR began to market the MGL abroad, and it quickly found success, being sold to several nations in the Developing World before the decade had ended. By the 1990s, several competing imitators and customers in the Industrialized World followed, quickly cementing the MGL into the position of being the world’s most successful repeating grenade launcher.

The MGL has a distinctive appearance, which until recent years was fairly unique. It has a skeleton buttstock attached to the butt of the cylinder crane hinge, that can fold 180 degrees over the top of the weapon, an assault rifle-style pistol grip, and a shallowly-bulged 90 degree foregrip bracketed to the barrel. The receiver is wedge-shaped, with a conspicuously large trigger and trigger guard, and the aforementioned rifle-style pistol grip attached to the underside of the back end. The cylinder has a flat recoil shield, a bottom strap, a thicker front shield, and an overhead cylindrical housing for the cylinder crane hinge, which swings 90 degrees to the left side when unlocked. The ejector rod used to unlock the cylinder has a distinctive C-shaped catch. The barrel is short, awkwardly resembling a drainpipe, and the aforementioned foregrip is attached to it by a bracket. The standard finish of the MGL is dark and metallic, but they have also been produced in other colors as well (such as sand or olive drab).

The original MGL Mk.1 was made of an aluminum alloy, but this was eventually replaced in production by examples made instead from stainless steel, which were designated as the MGL Mk.1S. The dimensions of the Mk.1S changed slightly, with the overall length and length with the stock folded increasing to 787 mm and 661 mm, respectively, and the unloaded weight increasing by 0.3 kg. Later examples of the MGL Mk.1S have a larger scope, and a rifle-style telescoping buttstock.

Further development of the MGL resulted in the MGL-140. This model is distinguished primarily by its longer 140 mm cylinder (hence, “MGL-140”), compared to the 105 mm cylinder used in the MGL Mk.1 and Mk.1S. The MGL-140 has also been referred to as the MGL Mk.1L (the “L” denoting the longer cylinder), but the MGL-140 designation is usually used to avoid confusion with the preceding models. As the features and capabilities of the MGL-140 have markedly changed over the original production models.

As in the earlier Hawk Engineering MM-1, the drum magazine of the MGL is rotated by a spring when the weapon is fired, and must be rewound every time the weapon is reloaded. This process is faster in the MGL however, and is accomplished simply by rotating the magazine 360 degrees before or after reloading it. However, there is no cartridge extractor system, so any spent casings or unfired rounds must be removed by hand, one at a time.

The sight for the MGL is mounted atop the cylinder hinge, and is usually a telescope. It may also be fired without a functioning sight in an emergency, though unless the user is highly experienced in using the MGL, accuracy will suffer (especially at long ranges).

The MGL can fire any low-velocity 40×46 mm grenade. The same grenades are used by the US M79 grenade launcher and M203 underbarrel grenade launcher. For a list of some common examples, see the M79 page.

The MGL was first used in combat during the South African Border War by the SADF, in which it earned great praise from South African soldiers. This weapon has since seen action all over the world, in locations as far-flung as Central America, Central Asia, and the Philippines; and just as in the border war, wherever the MGL is used in combat, it impresses soldiers and journalists alike.

Known operators of the MGL and its variants include Bangladesh, Bosnia, Bolivia, Brazil, Chile, Columbia, Croatia, Denmark, France, Georgia, India, Israel, Indonesia, Kuwait, Malaysia, Mexico, the Netherlands, Pakistan, Peru, the Philippines, Saudi Arabia, South Africa, South Korea, Sri Lanka, Sweden, Taiwan, Thailand, Turkey, the United States, and Vietnam. Note that this list also includes nations witch use the MGL-140, as it is unclear with some operators as to whether they use the MGL, the MGL-140, or both. The MGL has also been manufactured under license in Columbia by INDUMIL, and the MGL-140 has been build under license in Croatia by RH Alan as the “RGB-6”. The MGL-140 has also been manufactured in the US as the M32 MGL — and interestingly, rather than being built by a US company, MILKOR has a US branch with its own “state-side” factories, that produce the M32 locally in the US.

The basic MGL was eventually phased out of production in favor of the MGL-140, which remains the flagship product of the MILKOR company. At least 50 000 MGLs of all types have been manufactured to date. 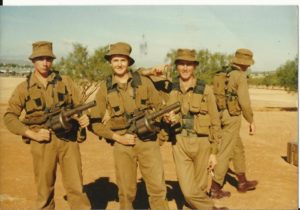